The beer that launched the beer revolution was Punk IPA. After 15 years, the flagship beer for BrewDog is now also available in a gluten-free version, demonstrating that wonderful beer is accessible to everybody. With the addition of new world hops, this pale, golden classic has been transformed into an explosion of flavour. Before a sharp, bitter end, there are bursts of caramel and tropical fruit, including a riot of grapefruit, pineapple, and lychee.

Punk IPA GF intends to take advantage of the growing market of customers who are switching to a gluten-free diet and desire to taste the crisp flavour of craft beer without feeling bloated and an ABV OF 5.4%.

Lauren Carrol, director of brand & marketing at BrewDog, said: “We believe in great beer for everyone – regardless of intolerances – so we always look for ways to continue revolutionising the craft beer industry. The new gluten-free version of our headliner Punk IPA will allow more people to enjoy the tropical flavours without the risk of dietary complications.”

Punk IPA GF pours a creamy orange colour with a faint haze that is finished with off-white foam with little bubbles, excellent retention, and especially lovely lacing. From the nose, it is very easy to see the hopping depths ahead. In addition to more tropical flavours like mango and lychee, there are lots of sweet oranges, fresh, pithy grapefruit, and oranges and limes. While the majority of its hop flavour initially lands with a citrus and lemony-grapefruit focus, it gradually diversifies to include a wide range of other fruits and herbal flavours. As we normally enjoy from GF IPA, the malt character remains understated and unobtrusive while providing just enough support for the hops.

This is exceptionally drinkable with a slim body, which allows one to concentrate on the richness of the hop flavour. This beer is a delight to drink, especially considering how much hops are there.

By drinking BrewDog, you’re having a positive impact on our planet. BrewDog is the World’s First Carbon Negative Brewery. For every beer they make, they remove twice as much CO₂ from the air as they emit. BrewDog have also made huge investments across their business to reduce our overall footprint. Find out more about their wide-ranging sustainability initiatives at brewdog.com. 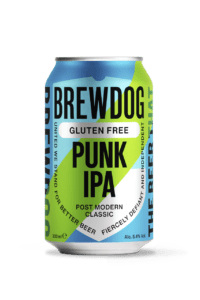